Delegates met to consider a number of new resolutions, as well as Emergency Resolutions arising from the ongoing war in Ukraine.  Robin McAlpine of Common Weal and Dr Mark McNaughton of the Scottish Sovereignty Research Group presented their ideas on where Scotland stands now on independence and pressing questions including Energy, Land Use and Taxation, Equal Pay and Universal Basic Income.

The Sing Sisters women’s protest group entertained us over lunch.

Conference reasserted Ukraine’s right to work out their own future, and reasserted our support for them.  Conference also noted the inconsistencies of home and foreign policy which have involved Scotland indirectly in overseas conflict.  We called on Westminster to reassess its relationship with Palestine, Yemen, Syria and other countries, and called on Westminster to sever links with the financial mechanisms which allow dirty money from Russia and other nations to be laundered in the UK.

We called on the Scottish Government to reassess Scottish Limited Partnerships which are being used for similar purposes, and were involved in 1/8 of Moldova’s wealth being syphoned off via these partnerships.

Noting that many recent conflicts have centred on oil availability/shortage, we called on the Scottish government to recommit to a National Energy Company and to pledge to keep all future energy production in Scotland within Scottish control.  Scotland’s abundant energy in the form of oil, gas, and green energy can form the basis of Europe’s fuel security free from dependence on Russia, and the invasion of Ukraine makes independence imperative for our security.

In light of the Russian invasion of Ukraine, over 3 million refugees have been forcibly displaced.  Moldova, the poorest country in Europe, has committed to welcoming 500,000 Ukrainian refugees, that is, one eight of their own population number.  In contrast, the UK has committed to 3000 refugees plus some other schemes.  We welcomed the Scottish government commitment to 3000 refugees under the ‘super-sponsor’ scheme, with the number rising as and when allowed. We urged the Scottish government to go further and ensure that all incoming refugees receive their human rights in full, including housing appropriate to their needs.

We noted the Cardiff model of housing those who do not speak English together to allow time to heal, and further suggested using empty army barracks for housing.

Despite the passing 52 years ago of the Equal Pay Act, aiming to ensure that groups like females, the disabled and ethnic minorities could fully participate in employment without disadvantage, there remain longstanding inequalities and a lack of political leadership in tackling them.

In view of the fact that Glasgow City Council has yet to implement the judgment on pay for work of equal value to 4000 women, Conference voted that employers across Scotland should honour and resolve outstanding equal pay and equal value settlements, including by employment agencies, giving males and females equal status, pay and value in the workplace.  Conference also encourages more accessible and frequent data on equal pay to be published amongst the public, private and third sectors including employment agencies, to better identify problems in wider society.

Local taxation is fully devolved in Scotland, yet corporations continue to land grab public land for private climate credits.  It would enhance the arguments for independence greatly if we could redesign land tax to show that we can already finance Scotland’s economy already, enhance local government finance, and reduce household bills.  Taxation of only £4 per square metre a year (following the grid system of what3words?) would raise more than the entire yearly Scottish budget.

Conference agree that Scotland should move from income-based taxes which place an unfair share of the public finance burden on poorer households to an asset-based system.  Differential rates would apply for different land use.

The National Records of Scotland showed in 2021 that the most deprived communities were more likely to suffer drug related death as the least-deprived communities, over 4 times as likely to suffer an alcohol-related deaths, 3 times the suicide rate, double the Covid death rates, and have lower life expectancy (25 years less for men, 21 for women), and healthy life expectancy (47 years for males, 50 for females).

Poverty exerts a crushing lifelong effect on children, stealing decades of their lives.  The Scottish government already has the power to bring in Universal Basic Income based on the Annual ground rent model (as above).  Trials have shown that there is no disincentive to working, and unfashionable jobs like social care may even become better paid as people would choose to work, rather than be forced.

Local councils already have finance from Holyrood to tackle poverty, and cash payments give people freedom, and would help improve mental health.

As always, Robin McAlpine brought many ideas to the forum.  Starting with his ideas on a referendum and independence, he followed up with local government, land ownership reform, renewable energy, a National Care Service, and housing.

First of all, Colette expressed out thanks to Robin McAlpine and Mark McNaught for their participation in our conference.

Colette pointed out that, as well as considering long-term policies, the ISP must look to giving solutions to current problems including the situation in Ukraine, and present a vision that we can do things differently in Scotland than we are able to do as part of the UK.

It is important to remember the historic Russian influence on the Brexit vote and the current influence they have on the Conservative party.  Lax laws have made London and the UK attractive for Russian oligarchs, and Scottish Limited Partnerships are sadly a part of that.  The UK appeared very unprepared for the Russian invasion of Ukraine and had to legislate on the back foot to sanction Russian oligarchs.

We must keep stressing that Scotland should be wealthy, not constantly juggling a budget which is half what it should be), and must work to bring disabled people into the workforce, establish a National Energy Company, and stand firm against selling off Scotland’s assets.

The ISP is the only party signed up to the Common Weal’s ’21 for 21 – the climate change actions Scotland needs now’ initiative. We also reaffirm the 2014 commitment that Scotland will not be a nuclear power or a host for other nuclear nations.

To underline our commitment to Ukraine, Colette was wearing a specially designed dress combining the Scottish and the Ukrainian flags (see photo). 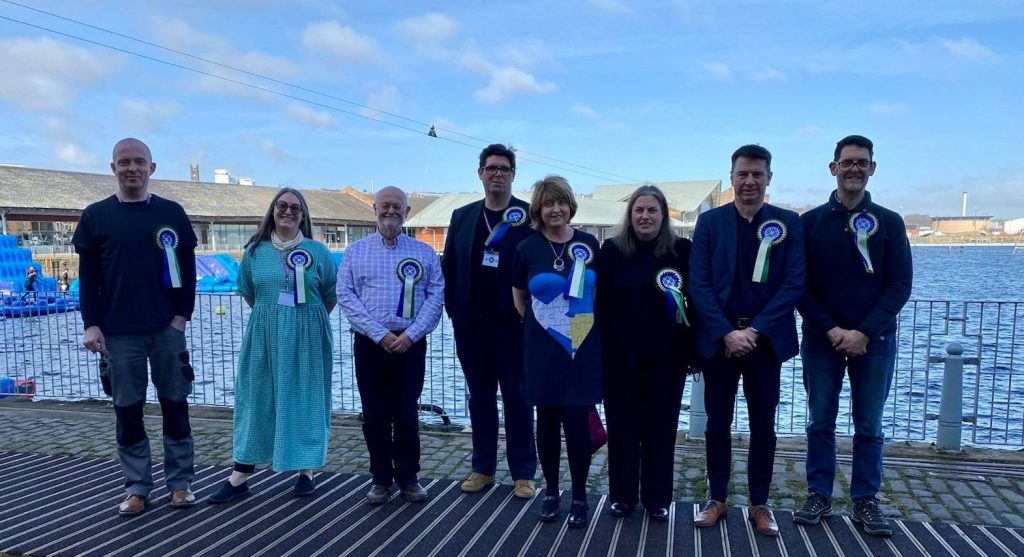 Scotland for Sale, Green Incentives +a Not so Just Transition