Conference affirms that Scotland has the right to self-determination at any point of its choosing and that the people of Scotland are sovereign in this decision. Conference calls upon the Scottish Government to begin withdrawal from the 1707 Treaty of Union as mandated by the express will of the Scottish people electing a majority of pro-independence members to the Scottish Parliament in May this year. 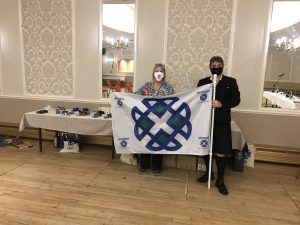 Conference calls for the Independence for Scotland Party to adopt, as a manifesto commitment, the goal of establishing Scotland as an independent republic with an end to the feudal system on the death of the current monarch.

The continuation of medieval titles born of the Norman invasion of England and the pattern of land ownership introduced is not only detrimental to modernising Scotland’s economy, introducing land reform and ending shady lobbying practices in our parliament but additionally impacts humanity’s attempts to mitigate climate change.

Further, conference believes that there should be no investiture, coronation, or recognition of any new monarch in Scotland without there first being a referendum on this issue. As the elected members of our parliament are chosen to represent the people and the multiplicity of views that exist in our body politic, they may not give assent or oath to any monarch without first seeking confirmation from the sovereign people of Scotland.

As a further adjunct, conference commends that as a matter of principle going forward, feudal titles are never again used in reference to any individual or claims to property and that instead only common names be used. Language is power and all should be equal before Scotland’s laws.

With the acknowledgement of a climate emergency and the oncoming COP26 conference in Glasgow, it is important for Scotland to have an awareness and vision of what energy policy should be with regards to what exists and what is required. As oil and gas used in energy production and vehicles declines, there will still be a transition period with products derived from hydrocarbons (namely plastics).

Conference calls for the set-up of a state-owned and operated Scottish energy company which would manage the careful transition from oil and gas. This company, with responsibility for managing assets in the oil and gas sector, would also therefore be responsible for phasing out supply from foreign countries, which often have a far worse environmental and human rights record. This transition would allow for financial proceeds to directly benefit the people of Scotland, with an expansion of research and development of more environmentally sound energy solutions. These measures will work to alleviate the fears of workers in the North East, which are currently having harmful effects on the wider Scottish economy.

The declining population in rural areas and the islands has been a topic for many years. The main problems identified with this decline are housing, services, transport and jobs. The influx of second home buyers, who normally advertise these as short-term lets, has harmed the first of these significantly. The aim of this resolution is to provide rural communities the ability to attract all generations to stay long-term should they wish to.

Investment and support is required for communities who know their area best without the interference of central government and large corporations. In 2012, the Colonsay Community Development Company, with the help of the Scottish Land Fund, bought land to create 5 small crofts, which remain working crofts today. A further project of building 24 affordable homes on the island was launched in April this year. These are the examples of what can be done with local knowledge and a strong long-term vision of what the rural community wants to look like.

Conference considers the following proposals to support the expansion of housing in rural and island communities:

In the wake of the murder of Sir David Amess, conference calls for the following:

Scotland has 39 designated battlefields, which are a major national resource to support education and research of Scotland’s history, as well as supporting worldwide understanding of historically significant events. There have been recent attempts to develop land around major Scottish battlefields in Culloden, Bothwell and Prestonpans, but there has been no response from the Scottish Government to defend these, instead leaving decision-making in the hands of cash-strapped local authorities.

Conference calls on the Scottish Parliament to provide enhanced protection for Scotland’s battlefield landscapes. This protection should include provision for preventing development occurring which adversely affects the sites of Scotland’s battlefields or the landscapes around them. Additionally, this should mean that those opposing development are not forced to repeatedly campaign against it.

Conference further calls for this preservation to include sites of witch trials and burnings which should receive further development as areas of historical interest. These sites should be recorded by community councils with the support of the public in order to give these areas local relevancy.

Conference recognises the importance of free journalism and other media to the people of Scotland. However, this is a two-way process and the Scottish people should benefit from the role that media and journalism plays in daily life. With the rise of disinformation and foreign interference in Scottish affairs, action is required to protect and enhance our media institutions.

Conference considers a raft of measures to ensure that media reporting for a Scottish audience work for the collective good and interest of that audience, which include the following:

Data released by the SQA has shown the attainment gap between the deprived and least deprived sections of Scotland widened across all measurements last year. The pandemic has forced different ways of working and learning, with the adjustment to remote learning affecting all levels of education. It is widely acknowledged that the effects of the pandemic have worsened inequalities, and Scottish education is no different.

The rollout of at-home online learning exposed weaknesses in understanding and knowledge of digital formats and delivery. Online learning is an important tool to consider more widely during times of normality as well as crisis, and should not be dismissed as something that only happened during the pandemic. It is therefore essential that Scotland adopts expectations with regards to this area.

Conference considers that the Scottish Government should adopt a policy initiative to “support the sustainable and effective adaption of the education and training to the digital age”, with free installation for all as described by the European Union’s Digital Education Action Plan (). The broad components of this initiative are:

The Scottish Government released a report in August this year which contains guidance for schools on how to support transgender pupils. There were several concerns raised as a result of this surrounding confidentiality and safeguarding of young people’s interests.

Conference rejects guidance which encourages gender affirmation of children of primary school age but keeps this information from parents.

Since the 2014 Independence Referendum there has been a mass political awakening. This has been an important learning curve in highlighting the democratic deficit in how Scotland is governed, both from Westminster and at home. When Scotland emerges as a new independent country there is need for changes to ensure that the Scottish Government are unable to impose unpopular policies with limited oversight and accountability.

Ideas such as a constitution, full proportional representation and citizens’ assemblies are important, however these do not allow the people of Scotland the final say on the issues that affect them. This is essential to allow the adoption of the free and equal state we want.

Conference considers that a system is adopted where any change to a future constitution of an independent Scotland affecting more than 30% of the population requires a mandatory referendum before these changes can be made.

Conference additionally considers that an optional referendum must be called on an issue raised by a petition signed by more than the agreed number of voters as laid out by a future constitution.

This resolution reaffirms the sex-based human rights of women to safety and privacy, health and bodily autonomy, fairness in sport and freedom from violence and exploitation. Recent efforts from voices in the Scottish Government, public and third sectors have proposed forcing Gender Recognition reform to a point where these human rights would be placed at risk. The nature and tone of the debate over these issues has been highly polarised and toxified by social media, with women unacceptably harassed and threatened for their views. For the avoidance of doubt, this resolution focuses on the areas which come under risk from those willing to exploit a system of self-identification and then receive no consequences as a result of this exploitation.

Conference considers that provision must be made for single-sex spaces in prisons, hospital wards, women’s refuges, changing rooms and toilets. Conference additionally calls upon Scottish sports bodies to review their policies on women’s sport and consider that these should be kept single-sex where there is an advantage conferred by biology alone.