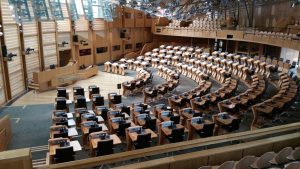 The SNP and the Greens entered a coalition this week. This is probably the least surprising thing to happen in Scottish politics for a while, and the policy direction that they have taken is completely unsurprising as well. However, it consolidates and confirms some of the things we have been saying. We thought it would be worth running over some of this ground again.

Firstly, this is quite definitely a coalition. We’re not sure why the SNP and Greens have gone to the lengths they have to make out that this is some kind of Schrodinger’s arrangement where they both are and aren’t in a coalition, but the difference between confidence/supply and a coalition is that a coalition is when you take ministerial positions and pay from the bigger party. We don’t know what the flip side of that deal was, as the SNP/Greens disagree on very little, and the list of policy differences (six) has almost a smack of desperation about it. We doubt that anyone was up at night wondering what either party’s positions were on private schools for example. But for all intents and purposes, this is a coalition. Doubling down on that is the fact that the Greens have agreed to muster with the SNP on votes of no confidence. We suspect this is what the real deal may have been rather than policy and perhaps what the real sticking point has been with their respective members (if they were consulted).

Secondly, it’s with a dull confirmation of déjà vu that we note independence has been put on the back burner – again. Do you remember Pete Wishart telling us there was going to be an indyref in 2021? We put out an article here( ) explaining just exactly why that was not going to happen. We were pooh-poohed at the time and accused of being splitters for saying so. It gives us no pleasure to be proved right. We are being told now that it will happen ‘after the pandemic is over’.

It’s what’s not there that’s instructive in this regard. No reference to legislation. No reference to going to court to help legislation get over hurdles in the parliament. If the groundwork isn’t there, neither is the referendum. You might argue it’s not fair to insist on this while we’re in the middle of a pandemic. However, this groundwork does not require knocking on doors, but it does require time. Going to court, drafting, and passing legislation needs time and we cannot see any commitment to that in their programme. If we delay until after the pandemic to do these things, then we’re not going to have a referendum in the first or the second half of the parliamentary term.

One thing has changed. The SNP/Greens are now officially singing from the same songsheet. Whatever their differences over private schools are, they’re not differing over their approach to independence, and any hope that we had that the Greens might act as a spur to the SNP to get a move on, has now dissolved. The SNP/Greens are now officially of one mind of this and there’s not a damn thing any of us can do about it. It’s three years to the Westminster elections and five to the next Holyrood elections. As Angus MacNeil said, ‘2026 is going to be 2021 for slow learners.’

What about the rest of their agreement? We’ll save our comments on GRA for another time, but we have very little to say about the rest of it. There is no point discussing climate change and the huge adjustments and investment needed to prevent disaster if you are not also going to discuss the fact that Scotland currently does not have the borrowing powers nor the political powers to make those changes happen. Scotland needs to be independent before it can be zero carbon. There is no attempt to begin to address that. The specious references to ‘strengthening the Sewell convention’ and making sure that Scotland’s powers are respected are laughable. One word. How? How do you safeguard our powers? We’re already being asset-stripped and the Internal Markets Act will see to the rest. This agreement is a programme for busy fools. It is like a prisoner keeping their cell obsessively tidy because it is the only thing they can control, when they should be jumping the jailer, snatching the keys, and running to freedom.

We’re not sure what else we can say. The capture of the two main independence parties is complete. For the rest of us, we have to start again. And what we are going to do for the next while is build. For that is what we now have to do.

This Week In Scotland – Week 47

Elimination of Violence Against Women

This Week In Scotland – Week 46

From Despair to Sharm El Sheikh – the Next Steps after COP26

This Week In Scotland – Week 45

The Week In Scotland – Week 44

This Week in Scotland – Week 43

Without Claim of Right

A History of Violence

This Week in Scotland – Week 41

This Week in Scotland – Week 40

What Part of the Word ‘No’ Does Keir Starmer Not Understand?

This Week In Scotland – Week 39