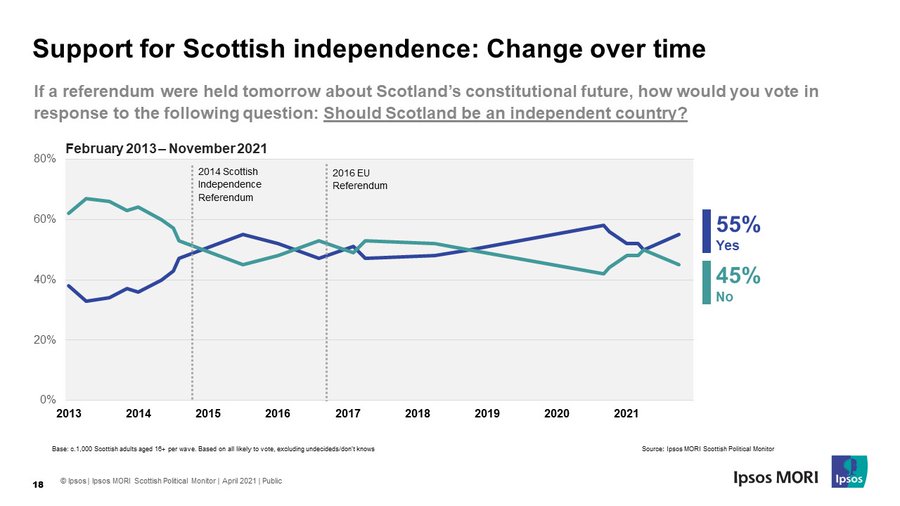 “The polls undoubtedly help to decide what people think, but their most important long-term influence may be on how people think. The interrogative process is very distinctly weighted against the asking of an intelligent question or the recording of a thoughtful answer.”

If the recent STV News/ Ipsos MORI poll showing 55% support for independence actually mattered then as a commercial station, dependent on the revenues of advertisers keen to reach its viewer base, we would not only see STV News give extensive and detailed coverage of this result but we’d see a more general change in the editorial approach to the broadcast content.

Broadcast licenses for television studios are not devolved but reserved to London.

The reason why Tories in London are comfortable with Scots ‘oohing’ and ‘aahing’ and high-fiving each other about 55% in this one poll is simple: there’s nothing we can do about it that doesn’t involve a huge loss of life. We don’t vote Tory – and haven’t since 1955 – so we can’t be bribed. The leadership of the main party of independence is as comfortable as they were in 2001-04 and have settled down for the status quo for the enrichment of friends, family, and lovers. If this brand of non-politics were a Farrow & Ball paint, it would be called Grey Gradualism, inoffensive to the point of being indistinguishable. The indy alternatives to the Scottish Government are lost to squabbling over niche issues in the fetid corner of social media reserved for this purpose by Pegasus, Prism, and Cheltenham GCHQ.

In regards to how we attain the independence we are all working toward, we should have remembered from our days as schoolchildren that if you can’t stop the fart, you let it out in a quiet corner and be the first to ask if that was someone else… Covid! Brexit! Currency!

There’s always a way to avoid drawing attention to the things you’ve done or, in the case of Scotland’s ruling party, not done. As far as social media is concerned, no one appears to have asked why the result of the poll was released after what was a very muted and under-attended SNP conference. One vote was passed with 45 votes: not a majority of 45 votes but just 45 votes in total from a membership that we’re still being told is greater than 120,000 paying subscribers.

The greatest trick the devil ever pulled was to persuade us that he didn’t exist. It’s a mastery that every magician attempts to repeat over and again throughout a single show. While we’re all looking at a rise in the polls as though it were coloured handkerchiefs being pulled from a pocket, we’re distracted from what the other hand is doing. Rather than ask why the governing party with a claimed membership much higher than 120,000 people can only draw 400 people to a conference in the run-up to the long- and often-promised referendum, we’re talking about a poll released by a Unionist organisation.

Here’s a warning my nan used to give us: Never Repeat A Lie. It’s a trap that Labour and other political parties have long succumbed to: it takes a disciplined mind to stop ourselves from taking part in a debate about the ‘need to balance the books’. It is pure neo-liberal hypocrisy but even expert commentators on the evening news repeat the phrasing.

A referendum was appropriate for the 2014 campaign because support – and the arguments – for independence were untested. Having been tested, the rules of engagement have changed. Policies of parties have changed but some are very hard-of-hearing or simply unable to keep up. All talk of ‘referendum’ is a Unionist blocking tactic up to and including the proverbial manure that says a Section 30 Order is required. It’s not and it never was (and even if it was, laws are changed all the time).

We are all confident that Scotland can easily afford to go her own way – heck, even former UK Prime Minister David Cameron said as much and he’s no friend of ours – so why would we ask the bully in the playground who’s stealing our cash to voluntarily hand it back by granting a Section 30 order? Why would the bully go out of pocket when he can simply continue to ignore us?

For over 300 years now, we’ve been trying to get back our right to govern ourselves and you’re only fooling yourself if you believe this isn’t a fight – the mere idea of Scottish independence is a great shadow of existential dread that haunts every hallowed green lawn from Windsor and Eton to Harrow and Westminster and mythical notions of Great Nation status.

This is a fight that we have been losing.

The first lesson I learned at karate as a kid is to not get distracted. It was a lesson hammered into every student at every lesson with fist, foot, elbow, knee, throw and grapple – and this was at a time before the Elfs of Safety demanded crash mats to cover hard wooden floors. Look again at old photos of Ali versus Foreman and you can see why only one of them got to be called Greatest Of All Time: in his posture, balance, poise, and gaze, it’s clear he’s reading Foreman like a nursery rhyme.

But back in Scotland, seven years after that momentous referendum so nearly won, and just two years after Independence for Scotland Party launched with a demand for plebiscite rather than the tame shame of referendum – a call was subsequently taken up not only by Alba Party but SNP MPs such as Angus MacNeil – we see independence supporters still demanding a referendum.

There is absolutely no excuse for this. None.

We know from historical examples of recent European history how to win independence and we know that a referendum is only to confirm the result.

Every time someone says ‘referendum’, whether Unionist or SNP, we should be speaking with one voice and loudly: “Plebiscite.” If we’re not doing that, we’re playing by the rules that London’s Tories – and their agents in Scotland – are setting us up to fail by and this is only possible because we are not staying focused. Distraction is not the end of the game but the whole of THEIR game: it is to tire us out, to cause us to bicker among ourselves.

On such a long road, we all need signs of encouragement now and again but that’s what meetings, stalls, marches, and merchandise are for – polls, headlines, positive noises from Holyrood, are all there to distract us as surely as flicking the fingers of one hand, only to more easily punch us hard in the head with the other (a specialty of my karate teacher).

When we’re focused – and united – we win.

“The essence of the independent mind lies not in what it thinks, but in how it thinks.”