Keep the Stone of Destiny in Scotland

When Elizabeth died, we hoped that common sense might prevail and that the monarchy might be brought to a quiet and dignified end. It didn’t happen. Not only that, but Scotland is to be given a reluctant starring role in the future King Charles’ coronation. The Stone of Destiny is to be transported down to London and in a very pointed ceremony, that stone is to be placed under the coronation chair. If there was ever a calculated symbolic insult of where the Scots feature in the UK, this is it.

Let’s be clear about this. The Stone of Destiny is as important to Scotland as the Koh -I -Noor is to India, the Elgin marbles to Greece and the Benin Bronzes to Benin. All were ‘acquired’ in a similar fashion; ie stolen. In the Stone of Destiny’s case, it was a spoil of war, taken by Edward I. It wasn’t permanently returned until 1996. It has no business returning to London and certainly not in the company of the monarchs who stole it in the first place.

Yes, we know there are those that will say it doesn’t matter; that it’s a symbol. But symbols do actually matter. All of Scotland’s monarchs were crowned on that stone. It represented the connection between the leader of the Scots, their people and the land. It is no more right to have the Stone of Destiny in King Charles’ coronation chair than it is to have the Koh – I-Noor in the crown that Camilla will wear at the same ceremony.

Westminster took the right decision in 1996 to return the Stone of Destiny. They need to take the right decision again. More than that, the Scottish Government needs to find a spine and insist that the Stone of Destiny stays here. To that end, ISP are asking you to write to your MSPs/MPs to get the Scottish Government to act. We’ve provided a draft letter above; you can either copy it or if you DM us, we’ll send you it as a word document.

We’re meant to be a sovereign people. Let’s prove it. Deeds, not words. 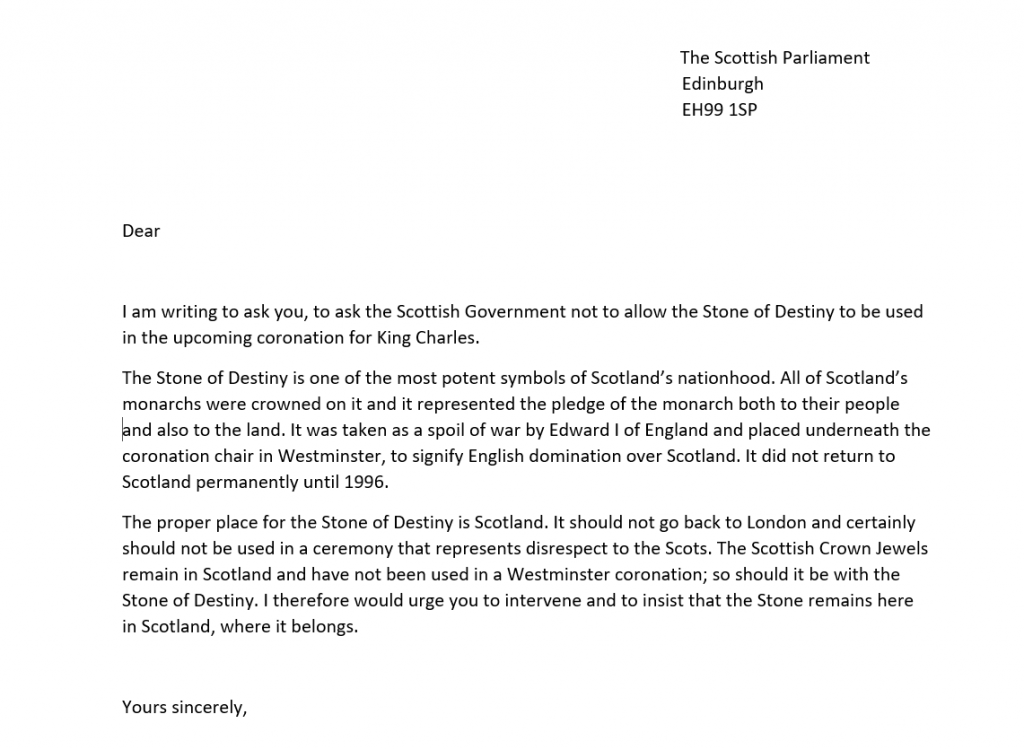