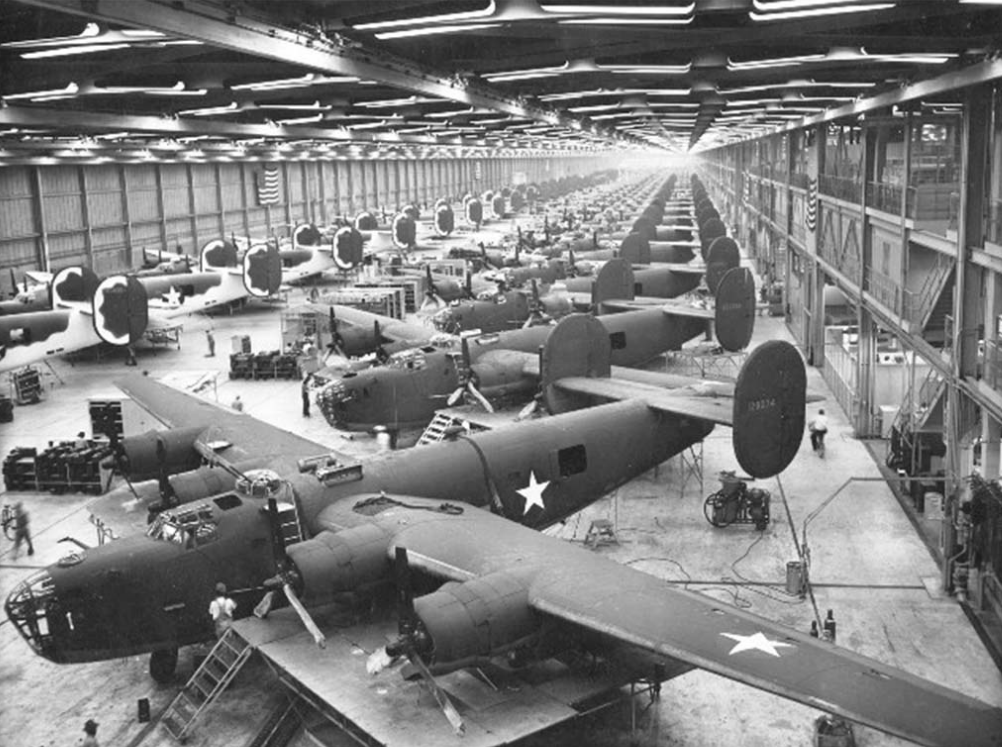 Image shows The Willow Run plant which produced a new B-24 bomber every hour, at peak, during World War II. (Source: The Detroit Bureau)

The invasion of Ukraine was not a surprise if you live in eastern Europe, nor was it a surprise if you’d studied the history of these nations. In the UK especially but perhaps also in other western European nations, we’re used to thinking of Europe’s history beginning and being focused on Paris, Rome, and London – and occasionally Berlin – but this is simply nothing like the truth. By the time the Normans were preparing for battle at Battle (Hastings, though larger, is several miles down the coast), the land we now called Ukraine was the wealthiest and most powerful in Europe.

The invasion of Ukraine was not a surprise if you had actually been listening to Putin and bothered to follow up his references. It turns out that he wasn’t lying or by deception, some master of strategy, nor was he talking to the gallery of his supporters in the style of his Western puppets, Trump and Johnson. Putin and his former-KGB chums were influenced by the writings of Ivan Ilyin, a Russian thinker whose ramblings I had the misfortune to encounter more than once at university. Despite being a man so toxic that even the Nazis didn’t know what to do with him in 1930s Germany, his ethno-eugenic principles have been adopted by Aleksandr Dugin, author of ‘Foundations of Geopolitics’, a book so fruit-bat crazy, we should be consoled that David Icke remains a subject of public mockery. Instead, as recently as 2019, Dugin engaged in debate with philosopher Bernard-Henri Lévy on the crisis of capitalism (more about Dugin later).

The invasion of Ukraine was not a surprise if you’ve ever had to deal with a bully in your own personal life. There are those of us who have always known reflexively that we would have to stand up to this guy at some point. Our halls of government are filled with bullies from Britain’s public schools, busy quoting Latin and Churchill; Putin is just the street version of the unconstructed thuggery that passes for leadership in both the UK and Russia.

The invasion of Ukraine was also not a surprise if you contemplated just how the petrochemical industry would react to us finally – finally – waking up to the fact that there’s something of an emergency going on globally.

The cost of oil and gas production has not increased. The cost of transport and supply of that oil and gas has not increased. The difference you’re paying in your heating bills, at the petrol station, to travel on public transport and so on is all profit and it’s not to your benefit. Look at how Saudi Arabia has reacted to requests to increase supply such that Europe and the US may ease itself away from a reliance on Russian gas: they haven’t at all. The Kingdom of Saud knows that it can only keep the revolutionaries and true people of faith from their palace doors by ensuring that their petrol economy stays as it is.

The invasion of Ukraine can only continue to be funded by Putin’s oligarchic coterie through the money that Russia continues to receive from the sale of oil and gas – even now. Once western Europe reaches summer temperatures, voters won’t be shivering at home, and governments in the EU won’t be afraid to push back harder and it’s bye-bye bad guy which is in part why Putin is ordering Ukraine’s cities to be flattened.
It’s not that we don’t currently need oil and gas for other things but because of Thatcherism, we no longer have to consider carbon shortages on British steel foundries; thanks to the Chinese, we can still plate the hulls of the aircraft carriers that Prime Ministers need for photo opportunities.

It’s Roman Senator Cicero asking, “Who benefits?” Those two words are the only question we ever really need to ask about anything reported of politics.

The global outrage that followed the failure of talks at COP26 showed that politicians would not be able to get away with continually schilling for the Saudis much longer. Russia’s entire economy is built on the fact that it processes and exports far more oil and gas than any other nation – more than 7.5m barrels per day – but Russia does not much else. This ridiculous situation has come about because the theft of her resources by the oligarchs has been facilitated by the financial services industry in London (itself built from the proceeds of Scotland’s resources in the 1980s). Russia hasn’t diversified because the income from her resources has been off-shored for the benefit of a few thugs who learned their trade under Vladimir Kumarin on the streets of St Petersburg, whose consigliere included not only Putin but the heads of the FSB and other Russian intelligence services.

The oil industry is scared. The future’s bright, the future doesn’t want them. It wants lithium and that brings us back to Ukraine and more specifically, the Donbas, in the south-east of the country. Ukraine has the largest untapped lithium reserves in Europe. Russia’s oligarchs want it in much the same way as they stole the tungsten, titanium, aluminum, and oil from Kazakhstan – remember that nation very nearly became a democracy too until Putin sent troops in just before Christmas on a ‘peace-keeping’ mission.

The oil industry will spend the next few years begging us – through various lobbying and marketing campaigns – to consider that we cannot make medical-grade plastics or fertilisers without oil. This obscures the fact that if we’re retooling our economies, we’re going to need less oil exploration anyway but such arguments are hoping we ignore several fundamental truths.

First, new oilfields can take two decades to profitably come online – too late therefore to help us through Christmas 2024, let alone this year.

Second, new projects have never honestly recorded the cost of decommissioning these facilities but have instead relied on the rules around limited companies to avoid liabilities such that the taxpayer picks up the bill – in other words, the companies claim bankruptcy and we pick up the bill for clean-up while the directors are sunning themselves on big yachts.

Third, the cost to the environment: more CO2 begets more water vapour in the tropopause begets far less ozone begets more ultraviolet begets… well, we’ll all be dead beyond the 2°C increase, so why worry? Fourth, and most importantly, electricity from renewable technologies are far, far cheaper! Why on Earth would Mr. Petrol think we would want to continue paying household bills this high? Scotland already produces what she needs from windmills and we’ve yet to exploit tidal turbine capacity.

Nigel Farage may be about to pivot Putin’s Brexit project toward ensuring that Russia’s oil industry remains able to decide the politics of our continent but he’s clearly not remembered his English king, Canute. The tide stops for no man. Even on days when there’s no wind, the tide flows and we’re an island nation – there’s a lot of tide to go around. Scotland is leading the global development of this technology – with an economy on a war-footing, roll-out would happen much more quickly.

The invasion of Ukraine may have been a surprise to some – it has definitely been a tragedy every bit as great as the invasion of Poland in 1939, the nation that Churchill described as Britain’s ‘first ally’ – but it needn’t be cause for despair. We’ve long looked for a reason to overcome resistance to the idea of retooling our economy and of being part of something larger than ourselves. We’re used to thinking this way about our nation, Scotland, and her place on the world stage, and of how our own small parts play in bringing about our nation’s independence but rarely does history so obviously hand us the keys to the door.

The invasion of Ukraine facilitated by the oil and gas industry was a strategic miscalculation: we find our way of life threatened by people who care nothing for morality, ethics, and our children’s future. The invasion of Ukraine was possible because oligarchs and the financial services industry that facilitated their greed and arrogance has grown out of all proportion to the world’s economy, particularly after a global pandemic, and now we’re being told that despite working all the hours we can, we must endure the shame of queuing at food banks, just so that some Moscow-bound white nationalist on a private jet can continue his corpulently gilded lifestyle with his London lawyer friends?

The invasion of Ukraine is being led by the most despicable anti-philosophy of the Twentieth Century. While some in our flock were bleating whatever the FSB told them to say through RT or GB News, some of us were actually looking in detail at what Dugin had advised Putin. If you only look at the summary of ‘Fundamentals of Geopolitics’, you will quickly understand that this is Lebensraum Russian-style. The more refugees that the EU accepts, the better because there’s not only a public cost of absorbing several million people into western Europe but it ensures there are fewer people resisting the absorption of a sovereign nation into Russia. Dugin is clear: Poland, the Baltic States, and Moldova are next. The public motivation is a perverse neo-fascist Slavic nationalism symbolised with a ‘Z’ but the private motivation is personal gain made impossible after the Maidan revolution put to rest the idea that oligarchs sympathetic to Putin could lay claim to them.

But the invasion of Ukraine is not just being fought on the fertile black earth of the land that Putin dismisses as ‘Little Russia’, it’s being fought on electricity meters, at our petrol pumps, and into our children’s futures. If you never want to see your kids have to pull on camouflage uniforms to fight in a place you couldn’t till this morning point to on a map, then we tackle this industry’s strangling hold on us now. This is a war we haven’t known we were fighting these eight years past but now that we do, it’s time to retool and refit our economy.

The truth is that building wind turbines is no more difficult in our advanced European economies now than factories in Ohio churning out B-24 Liberator bombers one an hour, every hour until Hitler was dead in a ditch behind his bunker. What’s stopping us are those Tory politicians too long in the service of Putin and his pals in the oil-and-gas industry.

In beginning to map out a path to peace in Ukraine and rapidly de-funding Putin by removing access to the bulk of the oligarch’s global wealth, controlled through representatives in London, it may help to define who our enemies are first. Johnson’s blandly boring six-point action plan on Ukraine ignores – deliberately or otherwise – the existence of laws already on statute, most particularly, the Trading with the Enemy Act 1939. To seize all the oligarch’s assets, we surely would only need to amend the act to redefine ‘enemy’ as someone who has facilitated the invasion of a sovereign, democratic nation with which the UK is at peace.