The Declaration of Arbroath is 702 years old. This is one of the main documents asserting Scotland’s rights as a nation. Great. Now, let me ask you another question. Who cares what a bunch of long dead landowners decided seven centuries ago?

Offended? Good. Now read that historical document again and imagine it had just been presented to a parliament of democratically-elected representatives chosen by us.

A bunch of barons – land-owners who in return for an oath of fealty to a king can raise an army from the serfs who would have been required to yield a share of the crops they grew as food – are declaring what they will and won’t accept. There’s nothing about common rights. There’s nothing about democratic freedoms. There’s nothing, in fact, for anyone in modern Scotland struggling to pay their heating and grocery bills or care for a vulnerable family.

Now, you might say that that’s not fair. The past is a different country. But that’s just the point. Other nations don’t rely on tracts and screeds full of royal pleading. Others, like Scotland, have struggled for centuries to have their independence recognised. Every day we turn on our TVs, log-in to our social media accounts, we can see what sacrifice people are having to pay to secure their right to be free of rule by their neighbours – their right to live even – and what are we doing? Living in hope of a referendum. Having needless arguments on social media? Still talking about Section 30s when we should have been having plebiscite elections? Are you not ashamed?

I am. Ashamed and embarrassed. It took me far too long to understand that the promise of a referendum was being held out as an electoral bribe by someone so comfortable with Scotland’s land-owning class that her ‘economic advisor’ is business advisor for landed gentry. Against that background, watching the First Minister we elected curtsying to an unelected head of state, let alone selling off the licenses to ScotWind for below bargain basement prices at a time when Scots are paying over the odds for the electrical surplus we send south makes an odd kind of sense if every time you’re challenged to do more for Scotland, one of your supporters screams ‘betrayal’. But we should always challenge our governments, even those we’ve chosen.

We should also challenge all notions of ‘nobility’. What have barons ever done for us except sell our land from under our feet or send us off to fight in wars that are for their personal profit? This is why it will always be important for us to challenge the line about not holding a referendum on monarchy until after independence in case we scare off the peasantry who don’t yet support the idea of being able to choose. Being scared of a media largely owned by folk who neither live here nor pay a fair share of taxes is beyond farce and it is most definitely anti-democratic because on such a timeline, the monarchy would be getting built into the constitution of what we were hoping was going to be a democratic nation.

Compare the meek obeisance shown by Scotland’s current crop of politicians with the absolute slapping that Prince William got served by Jamaica’s Prime Minister, who made it abundantly clear before the favoured grandson had sat down that as soon as His Royal Highness’ backside was seated on the plane home, the move towards making the nation a republic would begin. The look on William’s face was priceless, the dawning realisation that for the first time in his life, he was hearing the word: ‘No.’

Perhaps William saw a narrowing of the horizons available to a monarchy that has sat silent on the criminal embezzlement of other nation’s money to such an extent that it made possible the funding of the war of aggression against the sovereign European nation of Ukraine. How else do you think those vast loft apartments and the butlering of that fortune built such empty spires in London?

It was notable that even before the Covid pandemic locked us into a claustrophobia of fear, our demands for democracy on Zoom safely removed from the streets, that the current occupants of the seats in our parliament planned no celebration for the 700th anniversary of the signing of the declaration. I know because I asked.

A celebration of the Declaration of Arbroath at Holyrood was deemed ‘political’ by the parliamentary group that oversees the care of our parliament, following guidelines laid down by Westminster. If you believe the signing of the Declaration of Arbroath, the most hallowed document in Scottish history, whose signing was actually celebrated by nations across the EU in 2020 as the first flowering of government by consent if not by democracy, is of great importance then you must agree that the civil servants who enacted that rule – and the institutions established by the government in London – have no place in our politics even as occupiers.

There should be no negotiation or doubting ourselves on this. We need a new bill of rights.

Celebrations of the anniversary of the signing of the Declaration of Arbroath that are not part of our understanding of ourselves as an independent nation again, are a sign not only that Scotland has been living too long in the past but has grown most comfortable there. Our imaginations have foundered on what dreams were stolen from us, unable to imagine how we might take back what has always been ours: our future.

Real people are not history books. Many of us are cold, hungry, and watching a Tory Brexit steal opportunities from our economic recovery from pandemic. We should not be celebrating but instead viewing history as a challenge, asking new questions about how we’re ruled and what we’re going to do to change that.

Scotland needs a leader who refuses to recognise MPs prepared to take seats in the occupier’s parliament, a leader who refuses to bow, kneel or even acknowledge a monarch that Scotland’s people haven’t approved. You want a referendum? Ask the question on whether we want Charles sitting ensconced on our parliamentary affairs, our laws and electoral procedures while continuing to pay absolutely no tax at all.

If you would still cling to your celebrations despite all the arguments before you, please don’t sit there nodding like good little commoners when the Queen dies and Charles gets rushed through as the next monarch. His advisors are so confident before the event that they have formed an Accession Council among themselves. We should in reply be preparing a surprise for these profiteers and hangers-on, ready to disrupt any and all plans that seek to paint the accession of Charles as somehow able to re-unite people who haven’t chosen to be in a kingdom but are presumed to consent. Not least, we should be seeking to recall any MSP for by-election who affirms their loyalty to a new monarch without first consulting us.

Now, here as elsewhere, we feel the ground beneath begin to tremble, the world is changing but how disappointing, how shameful even, to later look back on this time and see only a missed opportunity. Perhaps then the greater part of the Declaration of Arbroath are not the lines the barons wrote for they wanted as king but the lines they borrowed from their Latin tutors, a passage which paraphrases lines long attributed to the Roman historian Sallust:

“…for, as long as but a hundred of us remain alive, never will we on any conditions be brought under English rule. It is in truth not for glory, nor riches, nor honours that we are fighting, but for freedom – for that alone, which no honest man gives up but with life itself.” 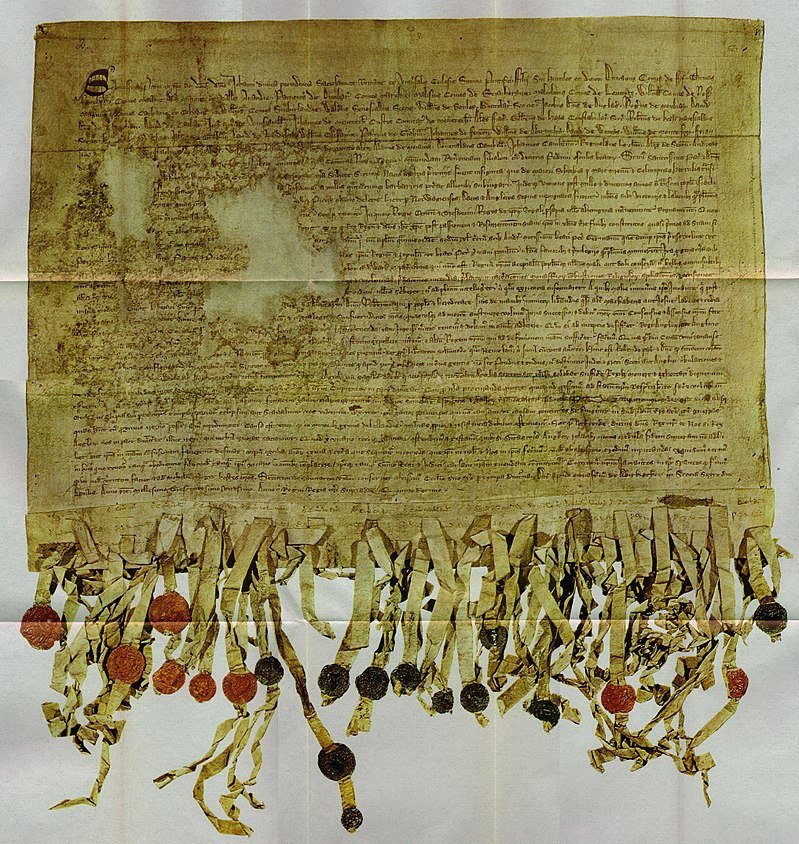 1 thought on “A New Declaration”